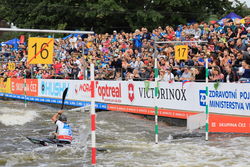 'It was a very good run. In the final I will keep an eye on Czech kayakers and will fight for the medals,' said Gennaro. A great show put on a current leader of World Cup series and a local competitor Prskavec. 'The first part of the course was great. So I will concentrate in the final on the second part. I will try to make it faster and stay on a direct line toward the finish line,' said former World Champion.

A loud crowd of the spectators drove forward to the final also other two Czech athletes – Vít Přindiš and Vavřinec Hradilek. 'My semifinal performance belongs to the spectators who were great. I definitely have a strenght for improvements before the final,' said Přindiš.